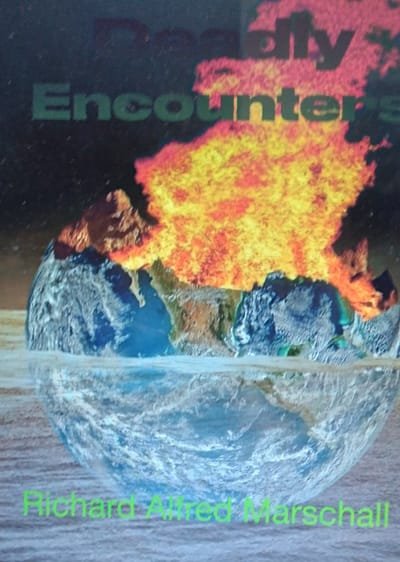 Seeing his displeasure and sensing the strong current of Abdul’s mounting frustration, the young father looked at Abdul, and said softly, “I’m sorry to bother you”.
Then, looking inadvertently  to the ground, he made the fatal mistake he would soon regret. “What’s this?” he continued, looking at the vials and plastic gallon containers of the yellowish-green liquid that had been meticulously aligned on the 2 x 4 foot blue towel Abdul had set up only minutes earlier. “Are these all for fishing?” he asked. He knew his mistake immediately when he saw the twisted expression on Abdul’s face and the sinister, dead, emotionless look in the man’s dark eyes. The father stopped, and, tugged again on his son’s hand; but it was too late.
Quickly screwing the suppressor onto the barrel of the Walther, Abdul was ready for what he had to do next. No one must know of his mission here, nor suspect anything amiss before his mission was complete. The life of the father was a small sacrifice for the greater good! One American for his own family. It was a no-brainer!
The little boy pleaded with him with his eyes. “Please don’t shoot us mister!” he cried, his little eyes growing larger as he saw the look of fear on his father’s face.  It was over in an instant. Abdul didn’t blink an eye as he shot the father. He would let the little one go. It would be hours before the young boy would be found, and by then, Abdul would be on his way back home. It was good he brought the gun. It made the deed less personable. It was the gun that took the father’s life! He’d do it again if he had to!
***
Wasn’t that what he’d been sent here to do?  Allah should be smiling! Standing there, the Walther still warm in his hand, he savored his accomplishment. It felt good. He was hot, flushed with his success. It was the gun! He was just a mortal! This cold, hard,  piece of molded metal dictated to him what had to be done. It controlled his every action! With this weapon he was king. Abdul cradled the warm machine of death to his bosom.
***
Could it be the darkness that had crept into his being? Was it not only yesterday that he had been a teacher, a forger of young minds? What had happened in that interim between daylight and night? The “cause” was never his! How had he succumbed to the rhetoric and falsehoods of the caliphate? What i chose to go back?
***
The little one froze, staring at the lifeless body of the person who had been his father only moments before. He shook his father’s dead body, trying to elicit a response. When there was none, he looked to the man with the still-smoking, weapon of death. He could do nothing here, so he ran, into the thick brush of the woods, his eyes those of a child in distress, his heart a cold, hard rock of anger and mistrust. There would come a day when he would revenge his father’s death.